Tales of the Mill

Stories from Bardon Mill Past

The Arsonist who didn’t have a leg to stand on

When the original woollen mill was destroyed by fire there was no need to send for Sherlock Holmes to find the culprit. Although unobserved at the Mill as he set his fire, Harvey, a disgruntled employee with a grudge, was betrayed by the unmistakable sound of his wooden leg clumping down the stairs as he made his escape. When confronted only minutes later at his home, apparently tucked up in bed, Harvey pled his innocence. Not being the sharpest tool in the box, he had unfortunately neglected to remove his clothing which smelled strongly of smoke! Sentenced to a lengthy term for arson, it transpired that he had also set fire to the Huntershill Mill – proof being the telltale print in the soft ground of a single foot and a vain attempt to disguise the lack of another! A sad footnote to this tale is that Harvey died in prison some years later. Today, listen closely and you may still hear the rhythmic thud as Harvey revisits the scene of his crime, a hopefully harmless poltergeist doomed to dwell forever on his misdeeds.

The Doctor and Miss Hinemarch’s will

In Victorian times, glazed garden edging was a popular product of the mill. You’ve probably seen it in old, established gardens, its twisted rope effect doing an attractive job of retaining flower beds and bordering paths. It was always a difficult product to fire, so production was discontinued…. until the visit of the undertaker from Haltwhistle with a request the management just couldn’t refuse. It transpired that Miss Hinemarch, who had recently died, had left instructions in her will that her grave should be enclosed in Bardon Mill rope edging. Careful old lady that she was, she left sufficient funds to pay for it. Faced with such a plea from beyond the grave, the required edging was produced, installed and the bill settled. That, all concerned supposed, was the end of the matter. A few weeks later, however, the Haltwhistle doctor appeared looking for the very same rope edging. When told that it was no longer available he protested that some had been produced for Miss Hinemarch. That was his big mistake. Although the special circumstances of Miss Hinemarch’s will were explained to him, he demanded the same treatment, only to be told with a wry smile, that he could certainly have his rope edging…..as soon as he qualified as Miss Hinemarch did! To find out how this story ends, have a look in the Haltwhistle cemetery and count the graves bordered in glazed rope edging.

The prankster, the hedgehog and Mr. Green

Life was once simple, unsophisticated and often hard, with country folk always keen to find new ways to pass what idle moments they had. Nothing if not inventive, they were even able to make use of everyday items from the world of work that surrounded them. One such piece of equipment was the trial rod. This was used to attract samples of clay from the kiln at fixed times during the salt glazing process to check its progress. Long, flexible and made of steel, and with a hook at one end, it clearly held promise for mischievous minds! The old village of Bardon Mill consisted of a single storey, heather thatched cottages, their chimney stacks a tempting target for a practical joker like Big John. Using his considerable height and the lengthy trial rod, he found that he could easily reach the chimney pots of most houses in the village. At a loose end one night Big John and hid his brother Isaac found a handy hedgehog. Attaching it to the hook on the end of the trial rod they carefully dropped the poor beast down Mr. Green’s chimney. It’s not difficult to picture the scene inside. Soot, smoke, shocked screams and a thoroughly disorientated hedgehog disturbing a quiet night by the fireside. Oddly, Mr Green didn’t get the joke. Hearing loud laughter outside he burst through the front door and let fly with a barrel load of birdshot in the general direction of the hilarity. Big John and Isaac took to their heels, their escape hindered by the long steel rod catching the ground as they fled. Finally finding refuge behind the Mill wall, their evening’s excitement ended with Big John picking lead shot from behind his brothers ear with a penknife. There is no record of the fate of the hedgehog.

The man who stopped smoking and saved marriages

There’s nothing quite as comforting as an open coal fire. The more so when it’s the sole source of heating and cooking as it was until not all that long ago. Coal fires are not without their drawbacks, however, with blowdowns, red-rimmed eyes and chronic coughs being the frequent result of the blustery weather experienced in this part of the world. Effective chimney pots were therefor always in demand and were a stable product of the mill from the beginning. Pots of every descrition were manufactured, the best known being the Bardon Mill Smoke Curer – still popular today. Unusually, this successful design was not a Bardon Mill original. It was an adaptation of the North Eastern pot, so called because it was a standard fitting of a North Eastern Railway Company property. The trouble was when it came to preventing blowdowns it didn’t! One of the brothers, Isaac, decided on a modification to correct the problem. But first he needed the exact dimensions of the North Eastern pot.
As an honest man above industrial espionage, he found a reasonably accessible example capping a wash house at the far end of the village.

Armed with a ruler, he climbed onto the roof and made the necessary measurements.

Back at the works, Isaac produced his blue print and developed a prototype. After much experimentation he arrived at the perfect solution to the blowdown problem.

Appreciation for Isaac’s efforts can be found today among the Mill’s records. Letters of thanks from people at the end of their tether, almost driven from their homes by constant smoke. The smoke Curer soon became known as the “marriage save”, preventing many wives from leaving home and families from quitting tied houses and therefore their jobs.
Strange to think that Isaac’s rooftop exploits with his ruler could have such an important social consequence.

The Bandsman, salmon and the bogus bobby

Big John who was clearly a bit of a character, looms large in these stories. Like many of his generation of potters, he was also a keen bandsman.
One Christmas he was returning home – complete with tuba – from a concert at Ridley Hall. As he crossed the bridge over the local burn his attention was drawn to a commotion in the water. Looking closer he discovered the salmon spawning.
Never one to pass up an opportunity for the one for the pot, Big John reached out and pulled out the larger fish by the tail. Being a practical man he quickly realised that the easiest way to carry his trophy was to carry it in the bell of his tuba.
That done, he set off in good spirits to join his fellow bandsmen in the Fox and Hound Inn. There he met an elderly relative, Frederick Saint, coincidentally also a tuba player. For Big John the temptation was to great. He sneakily swapped his tuba – with its hidden salmon for Frederick’s.

He then hurried down to the railway station and persuaded the station master to join the caper by pretending to be a policeman. A willing accomplice in Big Johns fun and games, the Station Master concealed himself by the roadside waiting for the bandsmen to pass on their way to the station.
As Frederick and his colleagues drew level, the Station Master leapt from cover, confronted Frederick and challenged him to reveal the contents of his tuba.It was as black as a lurn hat and in the dark the Station Master’s cap and uniform looked exactly like a bobby’s.
Frederick, more surprised than anyone to find the fish, became confused and flustered. It all ended happily of course, with Frederick much relieved. We can only assume that it was Big John’s very bulk that saved him from retribution for his practical jokes on friends and family. 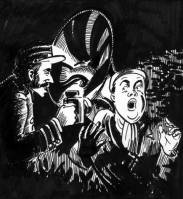 The nephew who tapped his uncle’s brains

Much water has flowed under the bridge since the days when experience and knowledge were respected and shared in the old fashioned way. Remember conversation, in the days before e-mail and surfing the internet?
Living in a world were communication is dominated by technology, we tend today to forget how important face -to-face contact can be in passing on information.
Take these tales from the Mill. They’re part and parcel of local folklore, handed down by word of mouth to the present generation. Although memories of the Mill as an active force in the community are fading, these stories remain as a valuable source of the life and work of the people of Bardon Mill.

But back to our tale. When Big John took over the running of the Mill, he was well aware of the contribution his uncle Roger, or Hodge as he was known, could make to the continued success of the business. They often met as they travelled the road between Bardon Mill and Haltwhistle, sitting down on their hunkers to discuss affairs at the factory.

These informal meetings, often punctuated by impromptu sketches in the dirt of the unsurfaced road, were an indispensable source of information for Big John as he worked to develop the business.
It may have been primitive by today’s standards, but it worked.
Many of these ideas raised during the roadside sessions were successfully implemented at the Mill.
Perhaps we could claim that a spot on the road between Bardon Mill and Haltwhistle was the world’s first web site. Or would that be spinning a yarn. 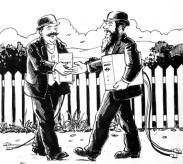 The village was named after the woollen mill beside the Chineley Burn. In 1878, the old mill became the pottery of Errington Reay & Co. Ltd., which once made sanitary ware and drainage pipes.
The factory now makes a wide range of the finest salt-glazed stoneware, including garden pots, storage jars, chimney pots and ornaments.

he tales of the mill are true stories told by the people who have worked their over the years and witnessed the funny goings on.
These true stories have been transcribed and illustrated to give you and idea of some of the things going on at the Mill. 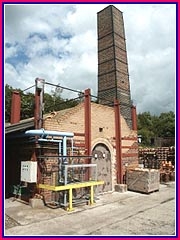